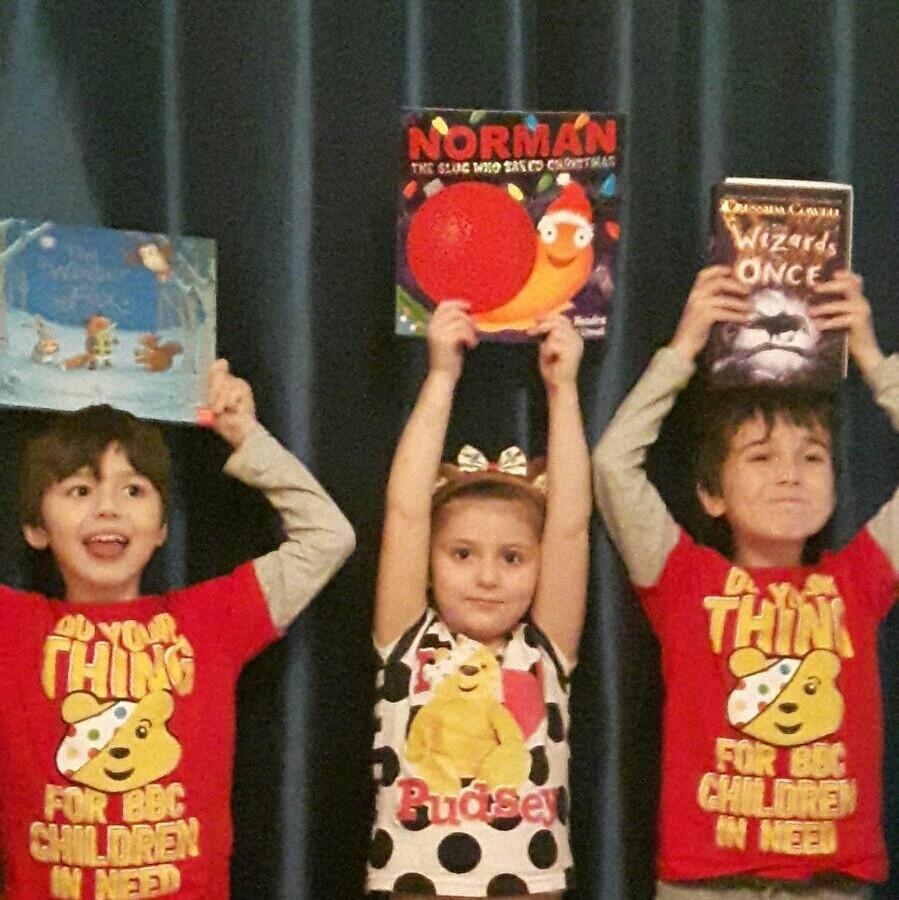 Children in Read 2018 is the fourth on line auction of signed books supported by authors from all around the globe.
All proceeds are passed on to BBC Children in Need.
Where P&P shows Free of Charge the book will be sent to the winning bidder directly by the author.
Auction is open to U.K. residents only.
Close.
Contact administrator 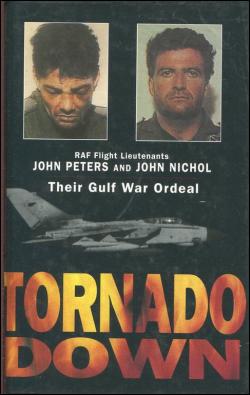 The Content:
RAF Flight lieutenants John Peters and John Nichol were shot down over enemy territory on their first airbourne mission of the Gulf War. Their capture in the desert, half a mile from their blazing Tornado bomber, began a nightmare seven-week ordeal of torture and interrogation which brought both men close to death. In Tornado Down, John Peters and John Nichol tell the incredible story of their part in the war against Saddam Hussien's regime. It is a brave and shocking and totally honest story: a story about war and its effects on the hearts and minds of men.

The Author:
John Nichol flew for the RAF for fifteen years. On active duty in the Gulf War he was shot down with his pilot John Peters. Captured and tortured, he was paraded on television provoking world-wide condemnation of the Iraqis and leaving one of the enduring images of the conflict. He is the bestselling co-author of TORNADO DOWN and TEAM TORNADO, both co-written with John Peters, and four novels POINT OF IMPACT, VANISHING POIN, EXCLUSION ZONE and STINGER. He has written for various national newspapers and is a widely quoted commentator on military affairs. He has also been a consultant and presenter for Newsnight, World in Action and Cutting Edge.

Kindly donated by
John Nichol
Confirm your bid
By confirming your bid, you commit to buy this item if you are the winning bidder at the end of the auction and you agree to the terms of this auction. 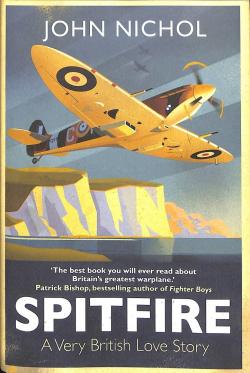 The iconic Spitfire found fame during the darkest early days of World War II. But what happened to the redoubtable fighter and its crews beyond the Battle of Britain, and why is it still so loved today?
In late spring 1940, Nazi Germany's domination of Europe had looked unstoppable. With the British Isles in easy reach since the fall of France, Adolf Hitler was convinced that Great Britain would be defeated in the skies over her southern coast, confident his Messerschmitts and Heinkels would outclass anything the Royal Air Force threw at them. What Hitler hadn't planned for was the agility and resilience of a marvel of British engineering that would quickly pass into legend - the Spitfire.
Bestselling author John Nichol's passionate portrait of this magnificent fighter aircraft, its many innovations and updates, and the people who flew and loved them, carries the reader beyond the dogfights over Kent and Sussex. Spanning the full global reach of the Spitfire's deployment during WWII, from Malta to North Africa and the Far East, then over the D-Day beaches, it is always accessible, effortlessly entertaining and full of extraordinary spirit.
Here are edge-of-the-seat stories and heart-stopping first-hand accounts of battling pilots forced to bail out over occupied territory; of sacrifice and wartime love; of aristocratic female flyers, and of the mechanics who braved the Nazi onslaught to keep the aircraft in battle-ready condition. Nichol takes the reader on a hair-raising, nail-biting and moving wartime history of the iconic Spitfire populated by a cast of redoubtable, heroic characters that make you want to stand up and cheer.
'A rich and heartfelt tribute to this most iconic British machine. By focussing on the men (and women) who flew the Spitfire, John Nichol has brought a fresh and powerful perspective to the story.' - Rowland White - author of Vulcan

The Author:
During 15 years service in the Royal Air Force John Nichol served as a technician and, after being commissioned from the ranks, as a Tornado Navigator in both the Air Defence and Ground Attack roles. On active duty in the Gulf he was shot down on the first low-level, daylight raid of the first Gulf War. Captured and tortured, he was paraded on television provoking worldwide condemnation and leaving one of the enduring images of the conflict.
John is the best-selling author of Tornado Down, five novels, and the highly acclaimed WWII history books, The Last Escape, Tail-End Charlies and Home Run. He is in demand to give motivational lectures and after-dinner speeches and has worked with wide variety of businesses including BT, Shell, Lloyds Bank and The Stockholm School of Economics.
Kindly donated by
John Nichol
Confirm your bid
By confirming your bid, you commit to buy this item if you are the winning bidder at the end of the auction and you agree to the terms of this auction. 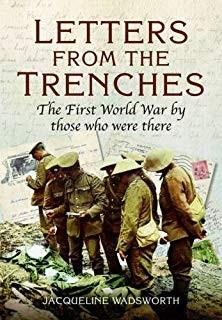 Lot 120
£ 35
23
NOT STARTED
Letters From The Trenches ; Jacqueline Wadsworth

The Content:
The history of the First World War told through hundreds of letters exchanged by ordinary British soldiers and their families. Letters from the Trenches reveals what people really thought and felt during the conflict and covers all social classes and groups – from officers to conscripts, servicewomen to conscientious objectors. Jacqueline Wadsworth skilfully uses the letters to tell the human story of the First World War – what mattered to Britain’s soldiers, sailors and airmen and their feelings about the war; how the conflict changed people; and how life continued on the Home Front. Voices within the book include Sergeant John Adams, 9th Royal Irish Fusiliers, who wrote in May 1917:'For the day we get our letter from home is a red Letter day in the history of the soldier out here. It is the only way we can hear what is going on. The slender thread between us and the homeland.' Private Stanley Goodhead, of the Manchester Pals Battalion, wrote home in 1916: 'I came out of the trenches last night after being in 4 days. You have no idea what 4 days in the trenches means...The whole time I was in I had only about 2 hours sleep and that was in snatches on the firing step. What dugouts there are, are flooded with mud and water up to the knees and the rats hold swimming galas in them...We are literally caked with brown mud and it is in all our food, tea etc.

The Author:
Jacqueline Wadsworth graduated from King's College, London, with a degree in Geography, and worked for several years as a newspaper journalist, punctuated by spells of backpacking abroad. She is now a freelance writer, specialising in history and sport. When not at her desk she is a keen runner, cyclist, follower of Liverpool FC, fan of American roots music, and supporter of The Donkey Sanctuary. Check out her blog at
Kindly donated by
Jacqueline Wadsworth
Confirm your bid
By confirming your bid, you commit to buy this item if you are the winning bidder at the end of the auction and you agree to the terms of this auction. 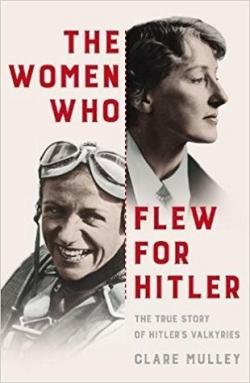 The Women Who Flew For Hitler : Clare Mulley
Bidding starts on 16-10-2018 08:48
CURRENT PRICE:
(Reserve not met !)
LOT #:
BIDS:
£ 53
123
14
Highest bidder: Art Harvey
YOUR BID:
£
CLOSED
Minimum bid is £54 (Bid increments are £1). Enter a higher amount and we’ll bid up for you via proxy bidding
You are the highest bidder ! , but the reserve price has not been met.
You have been outbid! Bid again!
Signed Paperback:
P&P : Free of charge.
Clare will personally post her book to the winning bidder.

The Content:
Hanna Reitsch and Melitta von Stauffenberg were talented, courageous, and strikingly attractive women who fought convention to make their names in the male-dominated field of flight in 1930s Germany. With the war, both became pioneering test pilots and were awarded the Iron Cross for service to the Third Reich. But they could not have been more different and neither woman had a good word to say for the other.

Hanna was middle-class, vivacious, and distinctly Aryan, while the darker, more self-effacing Melitta came from an aristocratic Prussian family. Both were driven by deeply held convictions about honor and patriotism; but ultimately, while Hanna tried to save Hitler's life, begging him to let her fly him to safety in April 1945, Melitta covertly supported the most famous attempt to assassinate the Fuhrer. Their interwoven lives provide vivid insight into Nazi Germany and its attitudes toward women, class, and race.

Acclaimed biographer Clare Mulley gets under the skin of these two distinctive and unconventional women, giving a full--and as yet largely unknown--account of their contrasting yet strangely parallel lives, against a changing backdrop of the 1936 Olympics, the Eastern Front, the Berlin Air Club, and Hitler's bunker. Told with brio and great narrative flair, The Women Who Flew for Hitler is an extraordinary true story, with all the excitement and color of the best fiction.

The Author:
Clare Mulley is the award-wining author of three biographies.
- 'The Women Who Flew for Hitler' (Macmillan, 2017) explores the lives of Nazi Germany's only female test pilots, Hanna Reitsch and Melitta von Stauffenberg.
- 'The Spy Who Loved', (Macmillan, 2012) looks at the secretss and lives of Krystyna Skarbek, aka Christine Granville, the first woman to work for Britain as a special agent the war. The book has now been optioned by Universal Studios.
- 'The Woman Who Saved the Children', (Oneworld, 2009), is about Eglantyne Jebb, controversial founder of Save the Children, won the Daily Mail Biographers Club prize.
Clare also writes and reviews for the Spectator, History Today and the Telegraph among other publications. Increasingly on TV and radio, she is a busy public speaker, and chair of the judges for the Historical Writers Association Non-Fiction Prize 2017.
Kindly donated by
Clare Mulley
Confirm your bid
By confirming your bid, you commit to buy this item if you are the winning bidder at the end of the auction and you agree to the terms of this auction.