Read more ...
An auction of signed books and items donated by celebrated Authors and Illustrators from around the world.
All Packaging & Posting  with in the U.K. is Free.
If your postal address is outside of the U.K. contact                Childreninread@yahoo.com
We will contact author involved and make enquiry.
Successful bidders will be notified after the auction closes 13th November 2020 11:00 pm via e-mail.
If you believe yourself to be the successful bidder but have not received an e-mail in your inbox please check your SPAM.
Any enquiries contact The Children in Need Team at:
Twitter: @childreninread
E-Mail: childreninread@yahoo.com
Stay Safe
Close.
Contact administrator 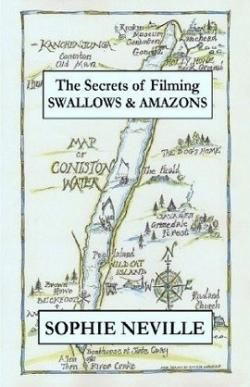 Sophie Neville
Bidding starts on 13-09-2020 00:01
CURRENT PRICE:
(Reserve not met !)
LOT #:
BIDS:
£ 201
108
64
Highest bidder: Anonymous
YOUR BID:
£
CLOSED
Minimum bid is £202 (Bid increments are £1). Enter a higher amount and we’ll bid up for you via proxy bidding
You are the highest bidder ! , but the reserve price has not been met.
You have been outbid! Bid again!
Book: The Secrets of Filming Swallows & Amazons
Genre: Autobiography
Hardback: First Edition (1974)
Signed, Dedication is Available.

The Book:
The true-life memoir of a child star. In 1973, Sophie Neville was cast as Titty alongside Suzanna Hamilton and Virginia McKenna in the EMI/Theatre Projects movie of 'Swallows & Amazons'. Made before the advent of CGI or digital technology, the young actors lived out Arthur Ransome's epic adventure, with all of its camaraderie and thrills, on location in the British Lake District.

As part of their schoolwork, the children were asked to keep diaries about their time spent filming. Meanwhile, the hip young crew from Elstree Studios were getting to grips with transforming 1970's Windermere in mid-holiday season into a 1929 idyll.

They never guessed that their happy 'Woodstock-on-wheels' experience would become such an enduring worldwide success, still screened on television and at festivals today.

This heart-warming memoir is illustrated with colour photographs, most of them taken at the time by Sophie's family, and contains links to behind-the-scenes home movie footage for readers with browser-enabled tablets. It delivers a double helping of nostalgia for both fans of the era of Arthur Ransome, and the groovy times of the early 70's.

The Author:
Award-winning author Sophie Neville became inadvertently well known as a child when she starred as Titty in the 1974 feature film of Arthur Ransome's book Swallows and Amazons.

After that sunshiny time she went on to work for the BBC behind the camera on television programmes such as Gerald Durrell's My Family and Other Animals, Doctor Who and Eastenders. Having produced her own Inset series for BBC2 she was busy directing her second drama serial for children when disaster struck in the form of a mystery illness.

Fully recovered, Sophie now lives on the south coast of England with her husband. Every year she disappears for a while to ride in different parts of the world and has also been known to go sailing, but only when the sun shines.

Kindly donated by
Sophie Neville
Confirm your bid
By confirming your bid, you commit to buy this item if you are the winning bidder at the end of the auction and you agree to the terms of this auction.