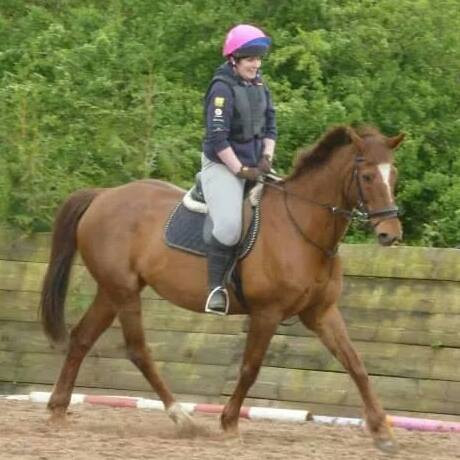 We are fundraising for the Teenage Cancer Trust and holding a Charity Ball in Cheshire on 31st October 2015.  This fundraising is to raise money for the TCT.

The ball is to also celebrate the life of Victoria Lunn who attended Active Rider camps and was looked after by the TCT.

Please join in and donate.

Victoria was diagnosed with Thyroid cancer at the age of 16 and successfully recovered from this. Sadly in 2012 aged just 24 she was further diagnosed with Stage 4 Clear Cell Ovarian Cancer and was treated by the St James' Hospital, Leeds.  She was a patient of Ward 94, the Young Person's Unit, supported by the Teenage Cancer Trust.  Vicky received a lot of treatment and support from the hospital and the Teenage Cancer Trust but the disease was too far advanced and she died 2 years after diagnosis.  During that time she managed to keep working full time and looked after her horse, Archie, until 5 months before her death. Victoria was booked onto the September 2014 Active Rider camp and cancelled as she was too poorly. She attended camps in 2010 and 2011.

The Teenage Cancer Trust has been fantastic in supporting Victoria and her family. Victoria's family hope that every young person who faces Cancer has access to the great treatment and staff just as Victoria did.

Victoria’s family will be forever grateful to the Teenage Cancer Trust.

£325 raised
£10,000 target
Donation from Lanehead Stables, Rochdale. Kind regards.
£ 70
+£ 17.5 Gift Aid
Jaime Sanderson
I have donated a coaching / lesson with myself. I am a dressage rider, recently selected onto the LegUpForTalent programme and an riding at elementary and medium British Dressage. Like my Facebook page: Alyce King Dressage to find out more about me and my journey!
Alyce King
HOYS ticket donation. Sally xx
£ 60
+£ 15 Gift Aid
Sally Yates
Good luck
£ 20
+£ 5 Gift Aid
Sharon whiteway
I hope the auction and ball are a huge fundraising success
£ 150
+£ 37.5 Gift Aid
Emma Blundell
Load All Donate Records