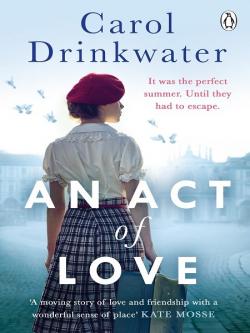 Carol Drinkwater
Bidding starts on 11-09-2021 12:00
CURRENT PRICE:
(Reserve not met !)
LOT #:
BIDS:
£ 38
9
9
Highest bidder: Andrew Harnett
YOUR BID:
£
CLOSED
Minimum bid is £39 (Bid increments are £1).
You are the highest bidder ! , but the reserve price has not been met.
You have been outbid! Bid again!
Title: An Act of Love
Genre: Historical Fiction / Romance
Format: Paperback
Dedication: Available
Postage: Free Universal

Forced to flee war ravaged Poland, Sara and her parents are offered refuge in a beautiful but dilapidated house in the French Alps. It seems the perfect hideaway, despite haunting traces of the previous occupants who left in haste.

But shadows soon fall over Sara's blissful summer, and her blossoming romance with local villager Alain. As the Nazis close in, the family is forced to make a harrowing choice that could drive them apart forever, while Sara's own bid for freedom risks several lives . . .
Will her family make it through the summer together?
And can she hold onto the love she has found with Alain?

The Author:
Carol Drinkwater (born 22 April 1948) is an Anglo-Irish actress, author and filmmaker. She is best known for her award-winning portrayal of Helen Herriot (née Alderson) in the television adaptation of the James Herriot books All Creatures Great and Small, which led to her receiving the Variety Club Television Personality of the Year award in 1985.She was a member of the National Theatre Company under the leadership of Laurence Olivier and has acted in numerous television series and films including the highly successful Chocky, Bouquet of Barbed Wire, Another Bouquet and Golden Pennies. Drinkwater won a Critics' Circle Best Screen Actress award for her role, Anne, in the feature film Father (1990) in which she starred opposite Max von Sydow. Amongst many other film and television series, she has appeared in Stanley Kubrick's A Clockwork Orange (1971), Queen Kong (1976), The Shout (1978), Father (1990), and the film adaptation of Beryl Bainbridge's novel An Awfully Big Adventure (1995), directed by Mike Newell and starring Hugh Grant and Alan Rickman.She has written a number of children's books, including her first, The Haunted School, which was produced as a television mini-series and film. Bought by Disney, it won the Chicago International Film Festival Gold Award for Children's Films. Her books for adults include commercial fiction and a series of best-selling memoirs about her experiences on her olive farm in Provence. In 2013 Drinkwater worked on a series of five documentary films inspired by her two Mediterranean travel books, The Olive Route and The Olive Tree. The films were completed in February 2013 and have since been broadcast on international networks worldwide. In 2015 Penguin Books UK announced a deal signed with Drinkwater to write epic novels. The first, The Forgotten Summer was published in March 2016. The fourth on this contract is due out in April 2021. She is married to French TV producer Michel Noll.
Kindly donated by
Carol Drinkwater
Confirm your bid
By confirming your bid, you commit to buy this item if you are the winning bidder at the end of the auction and you agree to the terms of this auction.