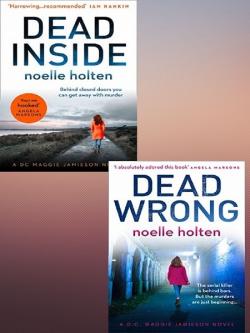 Book 1: Dead Inside
When three domestic abuse offenders are found beaten to death, DC Maggie Jamieson knows she is facing her toughest case yet.

The police suspect that Probation Officer Lucy Sherwood – who is connected to all three victims – is hiding a dark secret. Then a fourth domestic abuser is brutally murdered. And he is Lucy’s husband.

Now the finger of suspicion points at Lucy and the police are running out of time. Can Maggie and her team solve the murders before another person dies? And is Lucy really a cold-blooded killer?

Book 2: Dead Wrong
The serial killer is behind bars. But the murders are just beginning…

DC Maggie Jamieson's past comes back to haunt her in this dark and gripping serial killer thriller.

They were abducted years ago. Notorious serial killer Bill Raven admitted to killing them and was sentenced to life.

But now one of them has been found, dismembered and dumped in a bin bag in town.

Forensics reveal that she died just two days ago, when Raven was behind bars, so Maggie has a second killer to find.

Because even if the other missing women are still alive, one thing’s for certain: they don’t have long left to live…

The Author:
Noelle Holten is an award-winning blogger at http://www.crimebookjunkie.co.uk. She is the PR & Social Media Manager for Bookouture, a leading digital publisher in the UK, and was a regular reviewer on the Two Crime Writers and a Microphone podcast. Noelle worked as a Senior Probation Officer for eighteen years, covering a variety of cases including those involving serious domestic abuse. She has three Hons BA's - Philosophy, Sociology (Crime & Deviance) and Community Justice - and a Masters in Criminology. Noelle's hobbies include reading, author-stalking and sharing the booklove via her blog.
Dead Inside is her debut novel with One More Chapter / Killer Reads/Harper Collins UK and the start of a new series featuring DC Maggie Jamieson.
Kindly donated by
Noelle Holten
Confirm your bid
By confirming your bid, you commit to buy this item if you are the winning bidder at the end of the auction and you agree to the terms of this auction.